After seeing a short video of Henry Cavill (Superman :), the Witcher) travelling to a small Mediterranean village in Italy called Acciaroli, in which 300 residents have lived to the age of 100 or simply a long and disease-free life.

I am no Henry Cavill, but I also became very curious about it and did some research about the incredible health benefits of this plant. As a Jikiden Reiki practitioner one of the main mission of this practice apart from helping people live a more healthy, well-balanced life but is also to reduce medical waste... which is a great contribution not only to our own healthcare in general but also to our environment and planet.

Rosemary was well known to ancient practitioners. It was a herb known for strengthening the memory and helping the brain and also was used to help alleviate muscle pain, improve memory, boost the immune and circulatory system, and promote hair growth. Interestingly, for an herb plant, rosemary is surprisingly hardy. If you live in a climate with harsh winters, dig up your rosemary each year, and then put it in a pot and bring it inside for the winter. You can replant it outside after the spring thaw.

Roman priests used rosemary as incense in religious ceremonies, and many cultures considered it a herb to use as protection from evil spirits and witches. In England, it was burned in the homes of those who had died from illness, and placed on coffins before the grave was filled with dirt.

but lets see some facts

Rosmarinus officinalis L. (family, Lamiaceae), commonly known as rosemary, is one of the most popular perennial culinary herbs cultivated all over the world. Rosemary is a member of the mint family Lamiaceae, along with many other herbs, such as oregano, thyme, basil, and lavender. Both fresh and dried leaves of rosemary have been used for their characteristic aroma in food cooking or consumed in small amounts as herbal tea, while rosemary extracts are routinely employed as natural antioxidants to improve the shelf life of perishable foods. The herb not only tastes good in culinary dishes, but it is also a good source of iron, calcium, and vitamin B-6.

Rosemary is a rich source of antioxidants and anti-inflammatory compounds, which are thought to help boost the immune system and improve blood circulation.

According to a research outlined in Therapeutic Advances in Psychopharmacology, the aroma from rosemary can improve a person's concentration, performance, speed, and accuracy and, to a lesser extent, their mood.

Scientists have found that rosemary may also be good for your brain. Rosemary contains an ingredient called carnosic acid, which can fight off damage by free radicals in the brain. Some studies in rats have identified that rosemary might be useful for people who have experienced a stroke. Rosemary appears to be protective against brain damage and might improve recovery.

Some studies have suggested that rosemary may significantly help prevent brain aging. The therapeutic ability of rosemary for prevention of Alzheimer's shows promise, but more studies are needed.

Another study, published in Bioscience, Biotechnology and Biochemistry, concluded that rosemary might be useful as an anti-inflammatory and anti-tumor agent.

Also, a report published in the Journal of Food Science revealed that adding rosemary extract to ground beef reduces the formation of cancer-causing agents that can develop during cooking. 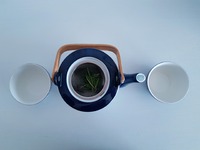 Using rosemary as a spice is probably one of the most well known things to do but you can also drink it as tea and to be honest, I like it better that way because I can appreciate a real flavour and aroma of this herb.

To make rosemary tea: Bring 10 ounces (295 ml) of water to a boil. Add 1 teaspoon of loose rosemary leaves to the hot water. Alternatively, place the leaves in a tea infuser and steep them for 5-10 minutes, depending on how flavorful you like your tea.

Rosemary is usually safe when taken in low doses. However, extremely large doses can trigger serious side effects, although this is rare.

High doses of rosemary may cause miscarriage; therefore it is not advisable for pregnant women to take any supplemental rosemary.

So my lovely friends like I always say, stay curious and discover research and try everything what you believe can benefit your health!